Detection unaffected by water or moisture

The Strang family has owned a family potato business since 1855 and since then has expanded and grown over 50%. Today the company has 14 employees and produces between 25,000 and 30,000 pounds of potatoes per hour which they supply to retail/grocery stores. However, in 2015 the Canadian Food Inspection Agency announced a recall of over 800,000 pounds of potatoes when hazardous sewing needles and nails were found by consumers throughout the Atlantic provinces. As a means to protect their business and brand reputation, Strang’s Produce shutdown for three and a half months to implement a stronger quality assurance program to ensure that their potatoes were free of any and all metal or physical contaminants.

Strang’s Produce purchased the Eagle™ Pack 400 HC, a superior x-ray inspection machine capable of detecting metal and non-metal contaminants, for wet potatoes that had been washed prior to processing. Unlike metal detectors, this technology lessens the case of false rejects because its detection capabilities are not affected by water or moisture resulting in a safer final product for consumers. This addition, along with a two-lane flip-up reject system helped to differentiate Strang from their competitors and prevented further plant shutdowns. Today Strang’s Produce has protected their brand and continues to produce and distribute safe high-quality potatoes. 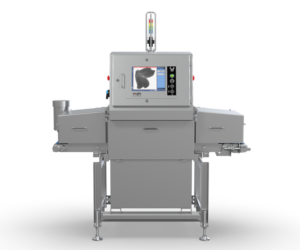 Hygienically constructed and built to sanitary design for quality control. It inspects small to mid-sized products and multilane applications for meat, poultry, seafood and dairy products.