There are promises of perfection and then there is the more accurate assessment of probability. By identifying variables in products and processes and by thoroughly testing products, a food or beverage manufacturer can get, what Eagle calls the greatest probability of detection (POD). This will indicate how likely a system is to perform given a certain set of circumstances. POD, which isn’t commonly understood in the industry, is crucial when choosing an inspection system.

Promises, promises. Food manufacturers hear a lot of them when they are looking at new equipment.

But making a capital investment is a serious decision that requires the most accurate  information and not just a vague or overstated promise. Such information is particularly pivotal in x-ray equipment designed to be a stopgap between food safety and potential hazards and between consistent quality and inconsistent or flawed products.

For advanced inspection systems that rejects contaminated products  and performs important product integrity checks, determining the probability of detection (referred to by Eagle as “POD”) provides the most accurate, consistent information about an inspection machine and how it will be used on a specific line.

A company looking at introducing an x-ray machine might be looking for certainty that the solution protects them 100% of the time. That’s just not realistic. 100% detection is statistically impossible to prove. POD, on the other hand, defines how likely a contaminant is to be detected by an x-ray system, given all of the variables associated with a certain application.

Those variables matter. A big block of butter, for example, is homogeneous and clearly defined in terms of its shape and how it is made. That block of butter has a different probability of detection than a product with more natural variation, like bulk granola or a ready meal. In addition to variations in product form, there are also variables in package sizes and types (especially as today’s manufacturers work with a greater variety of packages) and the process itself, such as varying line speeds.

With any variable, the element of consistency is taken away. The biggest variable, arguably, is the potential contaminant: it’s almost impossible to manage all contaminants that can make their way into any product. It is important, then, to use different test contaminants to give an indication of the likelihood of a foreign material being found in a particular item. Manufacturers and suppliers can work together to test the different contaminants that might be found in the product and in the package, including metal fragments, glass shards, small bits of plastic and other foreign materials.

Identifying and managing variables is done through repeated testing of inspection equipment before it is installed on the line. For example, our teams do multiple tests to try to simulate different types of contaminants – we may do passes – 30, 40 or more times to get the POD. What we’re looking for is information or evidence of past performance to predict how the system will perform in the future.

Is a promise of 99% detection realistic? To get 99% POD, you’d have to do tens of thousands of different passes in all variations. In the end, you’d be doing more testing than producing. Instead, it is better and more reasonable to understand where variables are coming from and conduct testing to assess what performance is possible, to create a realistic  POD.

Scrutinizing promises made by a supplier is an important part of evaluating x-ray inspection systems and software. To get a clearer picture of your probability of detection, read the white paper ‘Understanding the Probability of Detection in X-ray Inspection‘. 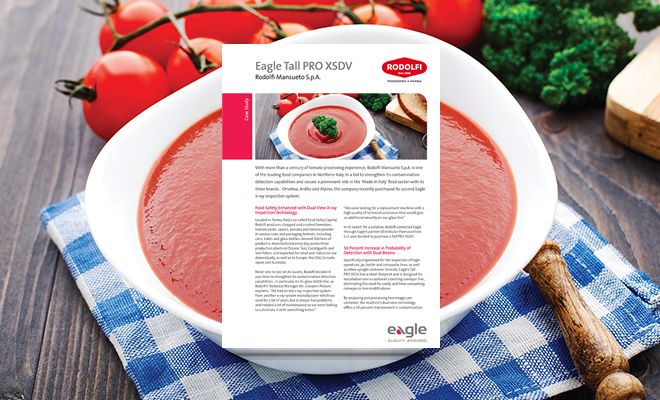 Learn how an Italian tomato manufacturer performs glass in glass inspection and other inline quality checks simultaneously at speeds of 200 glass jars per minute with the Eagle Tall PRO XSDV.

Food Manufacturers – How Can You Stay Competitive in a Challenging Environment?

You need to be registered to access the Knowledge Center